Fire up your brand online.

Wickfire’s online advertising channels generate over $500 million in annual sales for our clients.

More than half of shoppers say that online reviews influence their buying decisions. Take control of your brand identity.

Why Clients Choose Us

One of Wickfire’s founders, Chet Hall acts as Wickfire’s Chief Executive Officer. Previously, Chet worked as the VP of Product Development at ReachLocal. In this role, he led a team of Product Managers in creating and executing on ReachLocal’s product objectives. Chet graduated from the University of Southern California with a B.A. in Communication in 2003.

One of Wickfire’s founders, Jon Brown acts as Wickfire’s Chief Technology Officer. Previously, Jon worked as the Director of Automation Technology in ReachLocal’s development organization. Prior to ReachLocal, Jon received a B.S. in Computer Science from the University of Massachusetts, Amherst followed by a Master’s Degree in Language Technologies from Carnegie Mellon.

Cheney manages Wickfire’s SEM campaign performance and strategy. Her previous experience includes managing the Level II Support Operations team at the financial SaaS company, Q2ebanking, where she helped with client retention and the transformation to a premier 24/7 support team. Cheney holds a B.A. in Mathematics from the University of Texas.

Wickfire’s Katy Atlas presented on how to maximize growth in affiliate marketing in the current digital landscape. Explaining the core...

Wickfire's Jonathan Brown presented on how to incorporate product feeds into affiliate marketing strategies, including how product feeds can be... 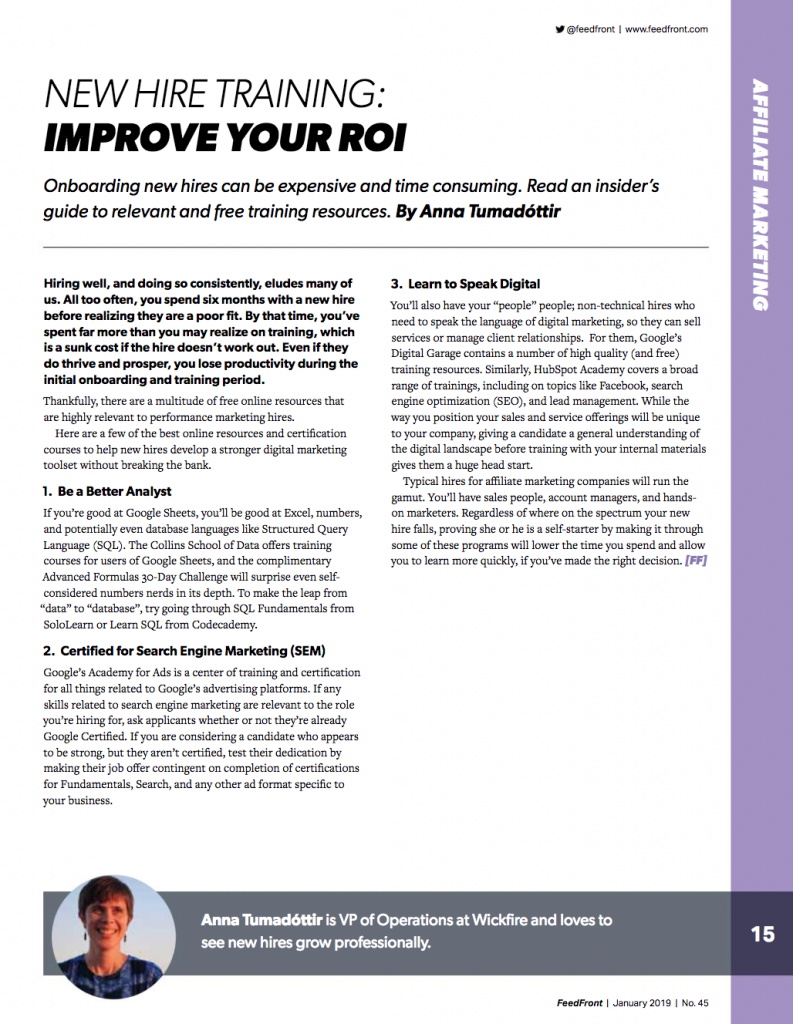 Wickfire’s VP of Operations Anna Tumadóttir discusses training new hires in the January 2019 issue of Feedfront. Check it out!

Wickfire’s Katy Atlas presented on how to maximize growth in affiliate marketing in the current digital landscape. Explaining the core…

Wickfire’s Jonathan Brown presented on how to incorporate product feeds into affiliate marketing strategies, including how product feeds can be…

Wickfire earned a high commendation for its cross-channel strategy that integrated Facebook and email, and linked past consumer behavior with…

Our status as a Google Premier Partner allows us early access and beta testing of new Google products.

Everyone at Wickfire works remotely, and we use collaborative technology to create a collegial, enthusiastic remote workforce.